In this post, Dr Wolski provides a quick summary and compares two recent texts on mediation and ethics.

Many of our readers will be familiar with Professor Waldman’s book titled ‘Mediation Ethics: Cases and Commentaries’ published in 2011 by Jossey-Bass. This is only the second text of which I am aware to deal exclusively with the ethical complexities of mediation practice. Waldman’s text is ground-breaking in that it adopts a case-specific problem-solving approach to the subject. (The first text was a collection of essays edited by Phyllis Bernard and Bryant Garth, titled ‘Dispute Resolution Ethics: A Comprehensive Guide’ published by the American Bar Association Section of Dispute Resolution in 2002.) According to Professor Waldman, one of the primary aims of her text is to showcase the diverse thinking in the field of mediation and to offer guidance to mediators on how to navigate the ‘murky ethical terrain’ that they are likely to encounter in practice.

There are thirteen chapters in Waldman’s text. The first, written by Professor Waldman, discusses the ‘underlying values of mediation, its regulatory codes, and emerging models of practice’. The values identified by Waldman are: disputant autonomy, procedural fairness, and substantive fairness. Each of the remaining 12 chapters deals with a particular ethical topic by using two or more case scenarios to illustrate the tension that may exist between these core values. Of continuing interest is the tension between the promotion of disputant autonomy (eg by helping disputants make informed decisions) and concern that basic norms of fairness and equity are not violated.

The case scenarios in each chapter are followed by commentaries from two (and sometimes more) leading dispute resolution scholars who explain what they would do in the circumstances presented and why. Contributors to the book are well known to us. They include:  Forrest (Woody) Mosten, Lela Love, Jacqueline Nolan-Hayley, Julie Macfarlane, Dwight Golann, Art Hinshaw, Carrie Menkel-Meadow and Harold Abramson. These commentators do not always agree on what to do. The diversity of mediation approaches is evident: facilitative, evaluative, narrative, transformative. Here Waldman is able to highlight the very different conclusions that experienced practitioners and scholars reach when analyzing what constitutes ‘right action’ in any particular mediated case. However despite these different end-points, there is a commonality in the way commentators approach problems presented in the case studies ie the authors identify the values that are important to them, the priority that they give to these values, and the action plan that they would adopt.

The issue of mediator responsibility for outcome fairness is a central theme tying the chapters together. In the end, Waldman’s own opinion shines through: mediators ‘ought to bear some responsibility for ensuring that mediated outcomes meet minimal standards of fairness’ though she acknowledges that the idea ‘remains controversial and has yet to gain traction’ (email with Professor Waldman dated 10 November 2016).

Waldman’s book is written is an accessible easy-to-read style, with mediation and conflict resolution professionals in mind. While the book will be useful for a range of people – students of dispute resolution, academics seeking inspiration for their classes, researchers and policy makers, and anyone else seeking thoughtful analysis of mediation’s many unresolved issues, the real strength of the book is in its practice orientation.

More recently another excellent text on mediation ethics has become available that being Omer Shapira’s text entitled ‘A Theory of Mediators’ Ethics: Foundations, Rationale, and Application’ published this year by Cambridge University Press. 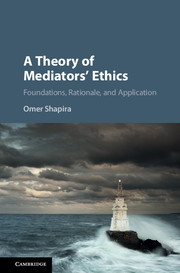 Many readers will be familiar with Dr Shapira’s earlier work in articles such as ‘Exploring the Concept of Power in Mediation: Mediators’ Sources of Power and Influence Tactics’ (2008-2009) 24 Ohio State Journal on Dispute Resolution 535; and ‘Joining Forces in Search for Answers: The Use of Therapeutic Jurisprudence in the Realm of Mediation Ethics’ (2008) 8 Pepperdine Dispute Resolution Law Journal 243.

As its title suggests, in this new publication, Shapira attempts to construct a theory of mediators’ ethics – a theory he describes as ‘a professional ethics perspective’ based on role-morality and applied to a core definition of the mediator’s role. This is used as the theoretical basis for discussing and evaluating the ethical norms that govern mediators conduct, including existing codes of conduct for mediators.

Shapira argues that all mediators are placed in ethical relationships with mediation parties, the mediation profession, the public and their employers or principals and that these relationships produce certain ethical obligations. He goes on to explore the legitimate expectations of these groups and ultimately to propose a model code of conduct for mediators described as ‘a detailed set of norms of mediators’ ethics that can be rationally justified and defended with regard to mediators at large’.

This book will also be of value to ADR researchers, teachers and students, mediators and mediation participants, mediation organizations and programs, policymakers and ethical bodies.

Comparing the Books: Which is Best?

While there are practical guidelines in Shapira’s work, this is a heavy-weight text, more theory oriented than Waldman’s book, and in the end, more prescriptive in its approach. It is more about what mediators ‘ought’ to do.

Both books in their own way strive to provide guidance for mediators on how they might exercise discretion in making decisions on the many aspects of mediator conduct where there is a choice between competing values and contradictory courses of action. This is an exciting new direction for mediation professionals.