Rachel Field’s recent post DR Praxis has had me reflecting on what has influenced how I approach negotiations and other DR processes as a lawyer.

The knowledge I have gained as a researcher significantly informs my approach to numerous aspects of my role, including DR processes.

But that knowledge has not just come from DR theory and my discussions with other DR practitioners and researchers.  It has also been significantly informed by other fields and disciplines.

The work by sociologists and socio-legal scholars on legal consciousness* has been a particular influence.  It seeks to explain the variable power of formal law in everyday life and how “legality” in everyday life is not necessarily determined by formal law. It can help us understand the role of formal law (if any) in how individuals interpret and respond to issues and problems, as well as the factors that may contribute to an individual turning to or away from formal law.

When it comes to DR processes, an understanding of legal consciousness can help us understand what participants require to effectively participate in the process and potentially how they respond in it.

Are there any theories or practices from other fields or disciplines that you intend to explore in your research or that will influence your practice in 2017?

Depending where you are (or whether you can travel), your interests (check the websites for program details, the streams and themes) and when they are being held, you may like to attend and/or look to present at:

Are there any other 2017 conferences or workshops you are aware of that DR academics or practitioners may find interesting?

In her article, Olivia demonstrates the breadth of factors that may influence lawyers’ participation in mediation as well as the potentially complex and variable impact the particular matrix of factors that impacts on any individual lawyer may have. The article begins by mapping the structural, external and personal influences on lawyer participation in mediation. Lawyer behaviour in mediation is then explored using a combination of Parker and Evans’ four categories of lawyers’ ethical orientations to legal practice and three of Olivia’s models of lawyer participation that may occur in mediation. Issues associated with the purpose in mediation of, relationship with client of and challenges to adversarial advocates, responsible lawyers and moral activists are examined. In the conclusion, Olivia makes recommendations about how the analysis in the article should impact upon mediator practice and encourages self-reflection by lawyers about their role in mediation because of its importance to their achieving their aims.

This article brings a new, intellectually rigorous perspective to the discussion about lawyer behaviour and participation in mediation. The debate is certainly no longer simply whether lawyers’ participation in mediation is beneficial or detrimental. The real issues are far more nuanced and include how can and when will lawyers effectively participate in mediation.   As Olivia identifies, this raises significant issues for mediators and lawyers. Is there even a potential it raises new disciplinary and ethical issues for lawyers?

In ‘The Dispute Tree and the Legal Forest’ (2014) 10 The Annual Review of Law and Social Science 105, Albiston, Edelman and Milligan propose replacement of Miller and Sarat’s dispute pyramid with a dispute tree.  They further suggest the stages of the emergence and transformation of disputes – that is, naming, blaming and claiming (Felstiner W et al, “The Emergence and Transformation of Disputes: Naming, Blaming Claiming” (1980-81) 15 (3-4) Law and Society Review 631) – be conceptualised as non-linear and fluid.

Why a Dispute Tree?

The dispute pyramid was proposed by Miller and Sarat in: Miller RE and Sarat A, ‘Grievances, Claims, and Disputes: Assessing the Adversary Culture’ (1980) 15 Law and Society Review 525: 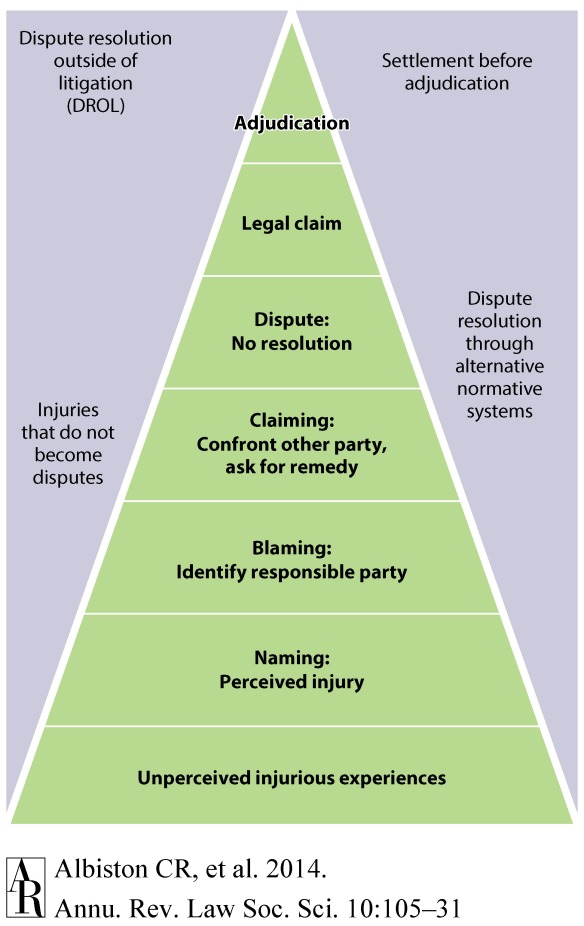 Albiston, Edelman and Milligan argue the metaphor of a tree with many branches better reflects the non-linear and dynamic nature of dispute resolution as well as the legal and non-legal means by which people may seek to resolve disputes.  They propose the dispute tree depicts that endeavours may be made to resolve disputes via various formal and informal means at the same time, that is, each different means that is pursued is represented by a separate branch on the tree. Some branches may bear fruit (substantive outcomes such as compensation) or flowers (symbolic results).  Other branches may wither, their growth may be stunted or they may never bear fruit or flower.  Albiston, Edelman and Milligan further argue the metaphor of a tree opens up the broader metaphor of the dispute tree existing within a forest and that this better represents the social environment in which disputes emerge and transform. 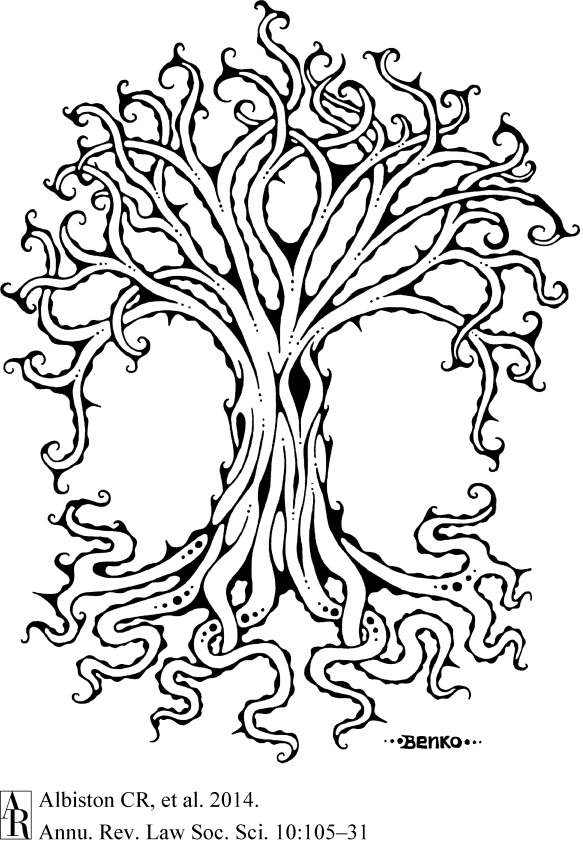 The Process of the Emergence and Transformation of Disputes

Albiston, Edelman and Milligan suggest the naming, blaming and claiming dispute process should be viewed as non-linear and fluid.  They argue this is consistent with anthropological models of the dispute process which “allowed for stages to occur out of sequence and for individuals to move back and forth across stages”. (p 110)  Notably, however, they were not the first to suggest this.  Galanter had earlier argued for a fluid, labile and moving view of the process of the emergence and transformation of disputes.  He suggested individuals could move from claiming “back to naming and blaming, to changing perceptions of injury and to changing attributions of responsibility for causing injury and providing remedy”: Marc Galanter,‘Access to Justice in a World of Expanding Social Capability’ (2010) 37 Fordham Urb LJ 115, 124.  A fluid, dynamic process for the emergence of disputes is arguably also consistent with Mayer’s argument that individuals utilise both engagement and avoidance strategies in naming, blaming and claiming.  Those strategies ultimately define what is viewed as in conflict and what is outside it. (Mayer B, The Conflict Paradox: Seven Dilemmas at the Core of Disputes (Jossey-Bass, 2015) 105)  In this sense, the avoidance and engagement strategies utilised by an individual contribute to the framing of the dispute.  As individuals may move between different avoidance and engagement strategies it is possible that an individual may move back and forth between different stages of the dispute process as they refine or expand that part of the event they identify as injurious or who they blame for the injurious event (for example, because new information comes to light or because they decide to engage with conflict about a particular issue after initially employing avoidance strategies in relation to it).

In the same article that he acknowledges the fluid, labile and moveable nature of the process of naming, blaming and claiming, Galanter gave a description of the dispute pyramid that accommodates the loss of many potential claims at each stage of the process: Marc Galanter,‘Access to Justice in a World of Expanding Social Capability’ (2010) 37 Fordham Urb LJ 115, 118.  There is also arguably no reason that the pyramid metaphor cannot allow for matters to move back and forth between different stages.

Is the dispute tree really then a superior metaphor?

The Australian Mediator Standards Board (MSB) has recently released the revised National Mediator Accreditation System (NMAS).  The revised NMAS will come into effect on 1 July 2015.  It will replace the original NMAS that was introduced in early 2008.  The MSB announced a review of the original NMAS in 2013 citing a desire to improve the clarity and succinctness of the original NMAS, clarify the processes for recognition of experience and non-NMAS qualifications and training, and adjust re-accreditation requirements.

The objectives of the revised NMAS are to:

The new NMAS can be viewed on the MSB website http://www.msb.org.au.

Does the revised NMAS achieve the objectives the MSB set for it?  Are there any further amendments that could have improved the NMAS?

An expert panel will examine short and long-term strategies for responding more effectively to workplace grievances at a Melbourne event hosted by the Victorian Association for Dispute Resolution on 16 April 2015.  The expert panel consists of an investigator (Murray Bickerdike), a labour relations expert (Dr Anna Chapman) and a mediator-trainer (Zandy Fell). David Moore will facilitate the discussions.

In conjunction with Professor Michael Weir and Dr Tina Hunter, we are looking into private landholder perceptions of the negotiations they have had with resource companies about conduct, compensation and access agreements (CCAs) as part of a broader project to design an optimal regulatory structure for land access. The negotiations we are examining occur in connection with the heavily regulated activity of coal seam gas extraction (CSG). Resource companies with authority to extract CSG frequently need to access private land in order to conduct extraction related activities. There has been growing concern about the impacts on the use and enjoyment of private land by its owners and occupiers (landholders) from the long term (often for decades), co-existential use of the land by resource companies and landholders. While a landholder cannot refuse access to their land, Queensland legislation (and that in many other Australian jurisdictions) requires resource companies to enter into CCAs with landholders.

Our analysis of the complex environment in which CSG extraction activities occur has lead us to conclude that promoting the public interest and not simply the interests of the negotiating parties, managing information asymmetry between the parties and appropriately allocating the cost of negative externalities resulting from CSG development activities warrant regulatory intervention in relation to CCAs, their negotiation and disputes while they are on foot. A key objective of any regulation must be to promote the integrative dimension of the negotiations. For our full analysis of these issues, see our forthcoming article in the Australasian Journal of Natural Resource Law and Policy:

Interviews we have conducted with landholders have produced evidence of a distributive dimension to many CCA negotiations. Landholders perceive that resource companies use power: including through withholding information and utilising a “big stick” approach to the negotiations, as well as add-ons in the negotiation of CCAs. We are, therefore, exploring how to encourage timely and fulsome information exchange and the use of power for creative problem solving. We are analysing the suitability of both express regulatory obligations (such as in the Native Title Act 1993 (Cth) in relation to the negotiation of indigenous land use agreements) as well as NUDGE-type strategies.

How, in your view, can the integrative dimension of negotiations be effectively promoted, whether through regulation or otherwise?

Previously on the Blog